Today marks the one month countdown to the SpaceX launch for the next NASA Commercial Resupply Services Mission (CRS-2). Pinehead is going get you prepped for launch by covering SpaceX from the outside, in. We are going to start with the big picture and drill down to various rocket/spacecraft components and launch preparations as we get closer to T-minus zero for CRS-2, scheduled for March 1st.
SpaceX is set up in several locations around the United States including a small Pacific island. Headquarters is located in Hawthorne, California. Their rocket testing facility is in McGregor, Texas. SpaceX has launch complexes at Cape Canaveral, Vandenberg Air Force Base in Lompoc, California, and Omelek Island about 2,500 miles southwest of Hawaii. They are also considering a launch site Brownsville, Texas located at the southern tip of the state. 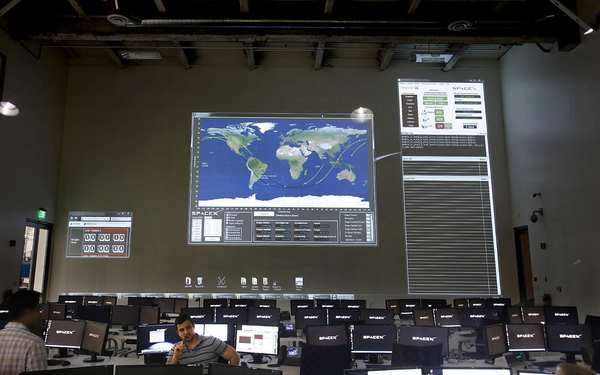 Hawthorne headquarters, located just south of Los Angeles near LAX, houses development, production, and the mission control center. SpaceX is known for building parts from scratch and you can’t do that without a lot of precision tools and sophisticated machinery. One example is the Mass Simulator, which tests avionics systems of several components at a time. The Electromagnetic Interference Test Chamber has a vague “torture chamber” appearance. It is a large room that can hold sections of a rocket to test the many antennas and receivers used in a mission verifying they communicate effectively with ground control. There are Thermal, and Thermal Vacuum, Cycling Chambers which test how parts will react in the harsh, airless, pitch black to burning sun rigors of space. Not impressed? Let’s talk Shaker Room. The Shaker Room has a large and a small shaker that are used to simulate the acoustic and vibration loads that take place during lift off. Seems like a hardware-store-paint-shaker-meets-a-Hulk-smash kind of scenario. If a part is going to break, it’s likely going to break in the Shaker Room. These testing instruments are just a few found at Hawthorne. For more, check out the video below where Elon Musk talks shop in a detailed tour of SpaceX HQ.

When testing 95,000-860,000 pounds of thrust the wide open spaces of Central Texas can be helpful. The SpaceX Engine and Structural Test Facility located in McGregor hosts several types of testing stands. Horizontal test stands, where engines are first tested, and vertical test stands where single and multi-engine burns are conducted. The vertical test stands have water cooled flame ducts that shifts the burn-through-concrete-hot exhaust from the engines out into the surrounding fields. There is a special test stand for the Draco thruster. Draco thrusters are used to maneuver the Dragon spacecraft and only operate in space so they have special vacuum test chamber. The control room at McGregor is in an underground bunker. A video tour, by Tom Mueller, is included below and has footage of the first Falcon 9 stage one full engine burn.
SpaceX uses Launch Pad 40 at Cape Canaveral. They renovated this location by demolishing the previous launch tower, adding a launch mount for Falcon 9, and a hanger. “People say SpaceX has big balls, and it’s true.” This Elon Musk reference, from the video tour below, is describing the giant sphere at the launch pad that holds about a million pounds of liquid oxygen used for Falcon 9 launches. There is also graffiti wall, of sorts, that documents the vehicles that have launched from Pad 40, most notably the Titan IV which was the largest vehicle in the U.S. fleet. Just outside the gates at Cape Canaveral, about 12 miles from the launch pad, is the SpaceX Launch Control Center where SpaceX customers can be close to their payload without having to deal with clearance needed to get into Cape Canaveral which is a military base.

Other SpaceX launch complexes are at Vandenberg Air Force Base and Omelek Island. Vandenberg is the scheduled location for the upcoming Falcon Heavy launch planned for 2013. Omelek Island was used for early Falcon 1 launches and is not currently listed as a launch site for any of the over four dozen launches on the SpaceX launch manifest. Having multiple launch sites allows them to launch at variety of inclinations. SpaceX is buying property around and conducting a FAA study for a Brownsville, Texas spaceport. If plans go through for a Brownsville launch location, they will be able to launch both Falcon 9 and Falcon Heavy vehicles.